I have started a cycle of lessons in class based around the five elements: earth, water,  fire, air and space as explained by Samkhyan philosophy.

Samkhya is one of the six major philosophies that originated in India. It describes the full spectrum of human existence by revealing the basic elements that make up everything in the universe, including the components that make up  the body, mind, and spirit. Samkhya names each element, teaches us its function, and shows us the relationship it has to all of the others.

Yoga takes the Samkhya philosophy into the realm of experience, starting from the gross or physical level, moving next to the subtler levels of mind and spirit, and then returning to the gross with a higher level of consciousness.

Samkhya states that the individual human being has 25 elements, or evolutes, that develop progressively out of one another.

I gave (what I hoped…) was a very simple overview of these elements in class.
My version, which was a bit like “Spot the Dog Learns Samkhyan Philosophy”  went a bit like this….(and don’t worry there is not going to be a test…) 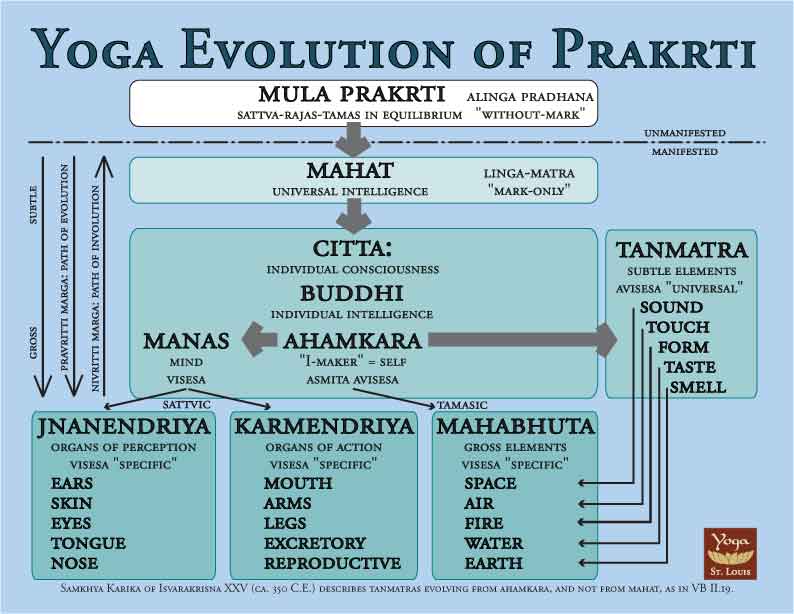 We have started work on the earth element, and that will be our focus for the next couple of weeks. I PROMISE there will not be such a long philosophy lecture next week 🙂

Let us be respectively aware, Life and death are of supreme importance. Time swiftly passes by, and with it our only chance. Each of us must aspire to awaken. Be aware: do not squander our life.

Michelle’s contagious commitment and love of yoga, combined with a wicked sense of humour, comes through in all of her classes, inspiring each of us individually to achieve on our personal journeys of emotional, mental and physical well-being. I always leave Michelle’s classes feeling better than when I arrived

I met Michelle through David Lloyd in Woking at a very challenging time in my life. I had no previous experience of yoga, but after participating in six months of classes I have absolutely no doubt that my ability to get through what I did was very much attributed to my state of mental and physical well being that I achieved by attending Michelle’s classes. Michelle has such a natural ability to make you feel at ease with your own body and to work with your mind and body to help you achieve a greater state of physical energy, balance and over all well being. I have since moved away from the area, but I am indebted to Michelle and particularly her teaching style, for introducing me to the world of yoga and can honestly say that she has been the best yoga teacher I have found.

‘Having been to a few yoga classes in the past, I would have to say that Michelle is one of the best teachers I’ve come across. She keeps a perfect balance between relaxing, fun classes and ‘serious’ yoga practise. I would recommend them to anyone!’

You offer a safe environment for us to practise in at what ever level we choose and you show the same respect and care to each one of us, whatever the standard of our practice. What’s more you follow us down our path with humour and love. You must have been a labrador in a previous life!

Michelle’s classes are unique. Her profound knowledge of all things yoga is insightful and inspiring especially when joining her group as a complete novice. In our busy lives, attending Michelle’s classes is imperative to restore balance both physically and mentally. She has a wonderful sense of humour and I cannot recommend these groups more highly.

Michelle’s is my favourite yoga class, by far. I love the fact that my yoga grows in both a physical and spiritual aspect. That I stretch and challenge my body, being mindful of my own ‘special needs areas’ and, with Michelle’s encouragement, being kind to them. That the yoga flows and moves harmoniously between asanas. That the music enhances the mood and weaves itself into the postures. I leave the class refreshed, relaxed, restored and happy to have been in such lovely company – hoping I can get to the class next week.

I have been going to Yoga classes since the age of 15 – I am 60 next year !! & I can honestly say that Michelle is one of THE best teachers I have ever had. Apart from the fact that I now have a major dysfunction called RSD (CRPS) . I had to give up most activities altogether but Yoga was the one that saw me through – Michelle accommodates each & every ability or disability as well as the fit & young. She is professional & yet fun. We all love her classes (young, old or dysfunctional !! ). She is great.

Michelle is an inspired and inspirational yoga teacher. She has a gift for making yoga accessible to everyone regardless of age, body type or previous yoga experience. She somehow manages to combine a wicked sense of humour with the spiritual and physical sides of yoga – something I had never even thought possible. Anyone, even vaguely considering yoga should try a course of Michelle yoga classes, although I have to warn that it does become addictive!

I have attended Michelle’s weekly yoga classes for several years and always find them uplifting. Michelle often introduces some aspect of yoga philosophy at the beginning and then carefully constructs the class around this. Most surprisingly lessons are never repeated. As well as gracefully demonstrating and leading us through the routines Michelle’s great sense of humour enlivens our classes. She also shows personal consideration to each student with hints and advice on how best to work within the limits of their body. Wonderful !

I started attending Michelle’s classes about 4 years ago when she covered a class for my then regular teacher. The style and nature of the classes that she covered were so inspiring and fun that I ended up changing my class so that I could practise under Michelle. Since then I’ve regularly attended 1-2 classes a week and also had the joy of having one-to-one sessions which I have thoroughly enjoyed. Michelle’s classes cover the physical practice as well as the more philosophical level and applicability to modern living. It is through her classes that I have managed to develop a deeper understanding of yoga and through her encouragement and guidance I am now undertaking the BWY Yoga Teacher Training Diploma. I really like the depth of knowledge Michelle has for yoga and the application of this through the various different styles and approaches she uses. I find her classes very accessible for all ages and abilities and they have been particularly good during my pregnancy. Her classes incorporate humour and personal experience which makes the classes very enjoyable and leave you wanting more. Having studied under different teachers I’m definitely grateful for having found such a good teacher as Michelle.

‘Having been to a few yoga classes in the past, I would have to say that Michelle is one of the best teachers I’ve come across. She keeps a perfect balance between relaxing, fun classes and ‘serious’ yoga practise. I would recommend them to anyone!’

I have been a student of Michelle’s for a couple of years now and love her classes. She is kind and gentle with a great sense of humour! If any body reading this thinks yoga is slow and sitting around in weird positions, take one of Michelle’s classes, She will win your heart and spirit and completely work out your body!!!!!…….

Michelle’s contagious commitment and love of yoga, combined with a wicked sense of humour, comes through in all of her classes, inspiring each of us individually to achieve on our personal journeys of emotional, mental and physical well-being. I always leave Michelle’s classes feeling better than when I arrived

Michelle brings all elements of Hatha yoga together for me in a clear understandable way. She combines breathing, chanting, yoga philosophy and posture work in such a way that I feel energised yet relaxed at the end of each session. With her help and guidance I have progressed from dabbling in yoga to living yoga, both with a daily practice being established and tricky philosophical concepts expanded and explained. Her non-dogmatic approach to yoga as well as her humour make her class fun yet challenging. I love my twice a week yoga class as, for me, Michelle has brought yoga alive!

Michelle does good preparation, teaches challenging yoga tailored to the class, with sensitivity and a delightful sense of humour.

I joined Michelle’s classes 3 years ago as a student yoga teacher and continue to travel on an amazing journey with her. I have discovered (and still continue to do so) many things about my body’s ability and strengths .I always thought that it was the poses themselves that I enjoyed the most but over the years I have discovered that the philosophy , meditations and modifications used by Michelle to be the highlight of the lesson plan. Michelle has an excellent reputation as teacher, she is caring, compassionate, disciplined and at all times re-assuring, no matter how many students are in the class you feel that Michelle is very aware of you as an individual and made to feel supported and encouraged. I have now qualified as a yoga teacher and still benefit from attending Michelle’s classes twice a week, I always feel physically and mentally refreshed ready to face life’s challenges, it goes without saying that I would recommend Michelle to anyone whatever their ability.

Michelle is a lovely person and an excellent yoga teacher. She also has a great sense of humour. I have attended her very enjoyable classes for several years and am very sad when, for various reasons, I sometimes have to miss a class.

You offer a safe environment for us to practise in at what ever level we choose and you show the same respect and care to each one of us, whatever the standard of our practice. What’s more you follow us down our path with humour and love. You must have been a labrador in a previous life!

I always leave Michelle’s classes feeling unravelled and relaxed. I especially like the way she is considerate to all my injuries! Her classes are always well thought out and structured.. My Thursday mornings with Michelle are so important to me that I even miss golf practice for them!